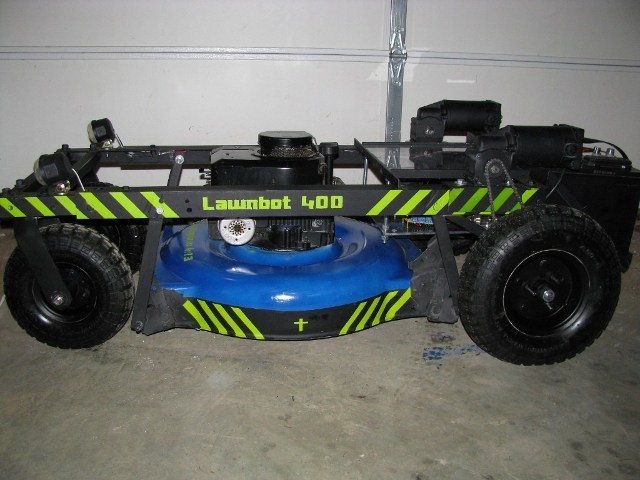 The lawnbot400 is a remotely controlled lawnmower that can mow your grass while you sit in the comfort of your home. This was my first real robotic project that I used the Arduino for, and it has evolved from a fun project into my most frequently used yard-tool. With a run time of about 6 hours straight, it usually has enough power to mow my entire yard twice between charging. I currently use this bot to mow my grass about every 2 weeks in the summer, and have now for about 2.5 years. The mower deck is an old Weed-Eater brand 22" push mower, so it will run as long as it has gas in the tank and the frame is driven by electric wheel-chair motors controlled via R/C and the Arduino microcontroller and powered by a large dual H-bridge motor-controller.

I originally posted this project on instructables, so here is the link to that write-up.

This is the Lawnbot in its early stages, with only what was needed to work: 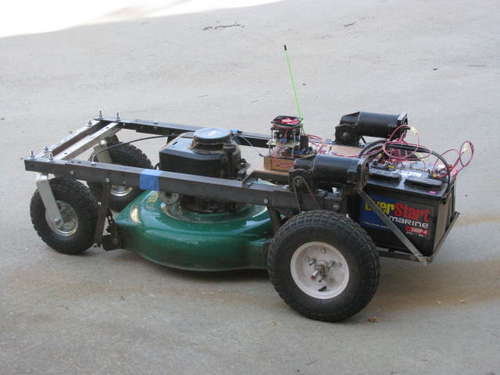 After some time using the Lawnbot in this state, I realized something about it... it was extremely powerful. Luckily, I picked out some gear motors on Ebay that were salvaged from a power wheelchair that I could afford ($70 shipped for the set) and they turned out to work perfectly. Since they were intended to carry approximately 500lbs total, the Lawnbot's 150-200lbs was no problem for the motors.

In addition to the motors having an output speed of only 250 rpm, I had to connect the wheel to the motor somehow, so I chose to use a set of sprockets and chain. The most cost-efficient solution was to use sprockets from the electric Scooters that are popular with kids and #25 chain. For whatever reason, I chose to use the only sprocket I could find that would fit my motor output shaft (5/8" with a woodruff key slot) and a set of $11 wheel sprockets from the scooter store. The 11-tooth drive sprockets to 55-tooth wheel sprockets further reduced the output speed and increased the torque, so now when the Lawnbot encounters a vine or small tree (1"-2" diameter) that was too large for it to push down with its weight, it will simply start climbing up the tree until the blades made contact and chopped it down. So naturally, I tried to ride it - see one of  the many videos here:

As you can see toward the end of the video, a wheelie is no problem for the Lawnbot400 :)

At this point, I had the idea of letting my powerful lawnbot carry stuff for me across my yard. I can't fit my truck into the yard, so I wanted to be able to back it up to the gate and load anything I need to haul onto the Lawnbot, which would then be able to access nearly any spot in my yard. To keep from placing bags of soil and dirt on my mower engine, I needed to add a bucket or platform of some sort. So one Saturday morning I decided to make a mock-up dump truck bed on top of the Lawnbot using some old plywood I found in the yard... this hilarity was also captured on video:

I have since added several additional accessories to the frame to make it more useful, like a set of headlights, a kill switch, and a wheel-barrow bucket on top with a motorized lift - all of which are operated remotely. If at any time, I feel like the Lawnbot is getting too close to something or it stops responding to my inputs, I can flip a kill switch on the R/C transmitter that will disable all movement on the bot - this failsafe also kicks in automatically if the bot gets out of range or the battery dies on the transmitter.

The Lawnbot400 has been featured on the cover of MAKE magazine issue 22, mentioned in Wired Magazine (the one with LadyAda on the cover), featured on Instructables.com (twice), it was in a feature article for my old college alumni magazine (UAB), and was included in my recent book "Arduino Robotics" as the chapter 10 project. While the plans for the Arduino are free, I plan on building kits for the lawnbot so you will soon be able to get your own, even if you dont want to build it from scratch... Stay tuned!