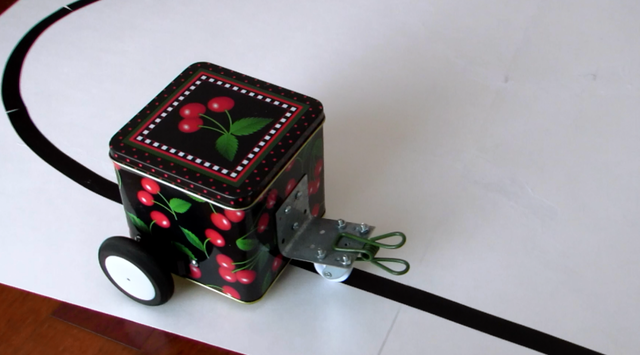 Finally got the linebot working reliably. I've uploaded 3 images and a movie. I also included the modified Arduino script provided for the "method 1" servos and "V2 Adafruit_Motorshield" I'm using. My sensor board image shows the original 5 sensors described in your "Arduino Robotics" book, but you'll notice now only the three middle sensors have signal wires, to match the 3-sensor script you provided.

The last tweak I did that really helped was locking down the orientation of the front wheel with a clothes pin. As the linebot went around a curve, I noticed the swiveled orientation of the front wheel would tend to continue rolling the linebot off course, away from the tape line. The other effect of the swiveling was it would change the gap between the sensors and poster board up and down. It surprised me how sensitive adjusting that sensor gap can be. I've included a side shot of the linebot that shows how the rotating wheel affects the height of the sensors. Once I locked down the swivel, the linebot started handling the curves much more reliably. In the future, I'll probably try swapping out the swivel roller altogether for a "ball bearing" type roller.