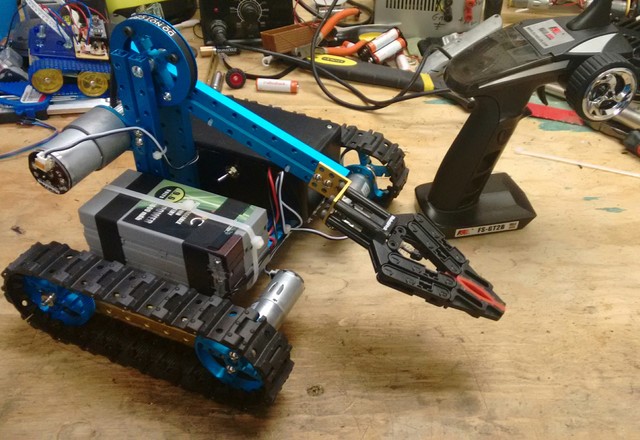 This is a tracked based robot with a lift arm and gripper claw. Its purpose is to drive around and pick things up. There was no real reason to build it other than I had the parts and thought my kids would like it.

It is a combination of MakeBlock parts that I got from Radio Shack as they were closing down stores, so I got most of the parts at 70% off what Radio Shack charges for them - which is only about 50% of what MakeBlock sells the parts for, but still a good deal all around. So, I grabbed several of the robot tank kits in both the bluetooth and infrared versions, a MakeBlock gripper claw, a couple of the 37mm 12v gear motors that spin at 50rpm, a timing belt kit with gears and belts, and several 9.6v NiMH battery packs. All of what I used for this project on clearance cost a little under $100 total. If you were to buy it all on the MakeBlock website, it would cost roughly $225 (not including all of the electronics).

The tank kit comes with an Arduino compatible controller board that has a built-in motor controller, but it only controls 2 motors and I needed to control 4 on this robot. Also the board that comes with the tank kit uses RJ-12 style connectors to plug in sensors and add-on modules, but does not have any female headers to connect another motor-controller to, so I had to use my own Arduino and a pair of L298N motor controller boards that I bought from Bangood.com. Each L298N controller can control 2 motors up to 2A per motor continuously, so I use one for the main drive motors on the tank base and the other for the lift motor and claw.

Lastly, I decided to use a 3-channel 2.4GHz controller to control everything. The throttle and steering are initially used to control the drive motors but then change to control the lift arm and claw motors using the 3rd channel as a switch.

Here is the code for now: